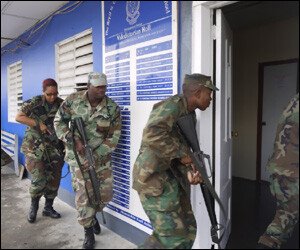 Two illegal gun seizures in a two week span and the removal of derelict vehicles around the island are some of the results of the Six-Point Security Plan being pursued by law enforcement in St. Kitts and Nevis.

The gun seizures were the result of searches carried out by officers in the Special Services Unit (SSU). The first on July 11, was the result of a random search based on the vigilance of the officers on patrol. The second occurred eleven days later (July 22) during a stop and search operation.

“We are pleased with the way the [security] plan is unfolding,” Acting Commissioner of Police Stafford Liburd said, noting that this was just the start and more results are expected as other security measures are implemented.

The public has reportedly been sharing information with law enforcement which has lead to credible leads in various investigations and initiated police action in others. Citizens have also been very supportive.

“Based on the responses during and after our stop and searches we recognize that there is a sense of appreciation for our heightened activity,” Liburd added. “They said we have increased public safety and we are working very hard to get crime back to the low levels we are accustomed to in St. Kitts and Nevis.”

The words of encouragement and renewed sense of teamwork have had a positive impact on the security forces. Morale is said to be up not just in the Royal St. Christopher and Nevis Police Force but also the St. Kitts-Nevis Defense Force and Her Majesty’s Customs and Excise Department. The three agencies are commonly referred to as the Joint Security Forces.