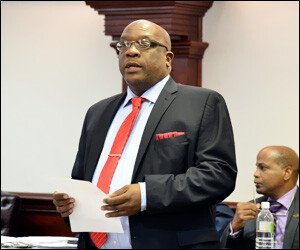 Clients who lost money when the Bank of Commerce closed some 30 years ago were put on alert by Prime Minister Dr. the Honourable Timothy Harris that a legal settlement had been arrived at, that allowed for the payment of $15 million.

Prime Minister Harris made the revelation during today’s (July 28) sitting of National Assembly.  He noted that the court settlement will bring “tremendous relief to the many suffering depositors in the Bank of Commerce,” noting that “a fresh start has now come to the depositors.”

Commenting on the 30 year process, the Prime Minister described it as an “entirely unsatisfactory period of time.”  He noted, however, that liquidation matters in general are very lengthy and not unique to St. Kitts and Nevis.

It was further revealed that the SSB which is a creditor to the Bank of Commerce should be receiving approximately $1.4 million, and the Nevis Philatelic Bureau was in line for just over a quarter of a million dollars.

“The government which has had substantial interest [investment] in the Bank of Commerce in a variety of funds etc., the government should receive just about $1.2 million,” the Prime Minister said.

Bank of Commerce depositors and the public in general were advised that more detailed information would be provided in the near future.