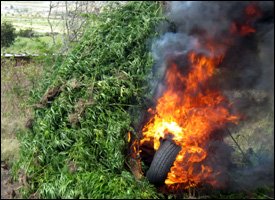 Police conducted search operations on 3rd February 2009 in the Bayford’s area. Two illicit rum stills were found at Ogee’s Ghaut along with 10 gallons of distilled Hammond (moonshine) and were destroyed. Further operations north of the RLB Airport fence revealed another two illicit rum stills as well as five gallons of Hammond, they too were destroyed. Two drums of molasses were also destroyed on the scene.

Similar operations were carried out in the Needmust area on the said date which led to the discovery of eleven thousand four hundred and eighty two (11,482) marijuana trees growing in a number of plots close to the Taiwanese Agricultural Project. The plants were uprooted and destroyed by fire at the scene. No one was held accountable for the finds.