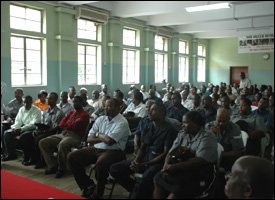 The Credit Union, which started business on January 20th 1984 at the insistence of then Commissioner of Police Mr. Stanley Franks without startup capital, now boasts assets over 20 million dollars.

“It currently has a membership of 1000 members, comprised mainly of members of the security forces and their families,” a police statement said Friday.

A number of activities have been planned to commemorate the anniversary including a church service this Sunday January 18th at the Word of Life New Testament Church of God.

Members’ Appreciation Day on January 20th at its offices on Cayon Street. Socials at the Patio in Charlestown and the Lawn Tennis Club, Victoria Road, Basseterre on January 23rd and 24th respectively, and a Health Walk from Police Headquarters in Basseterre to Frigate Bay at 6:00 A.M. on Saturday 24th.