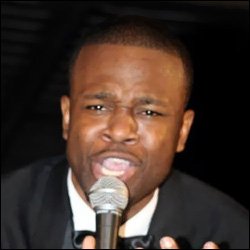 Part of the proceeds from a post Carnival King Konris Celebration Calypso Show on Saturday night will go towards the Rotary Advancement for Children Foundation and the Police Boys Club.

The brand new performing stage at Mapau Port Zante will be the venue of the post-carnival King Konris Celebration Calypso Show schedule for Saturday 17th January, at 9:00pm.

According to a press release, the 25-year-old of Mattingley Heights is celebrating his fourth consecutive victory in the National Calypso Monarch competition which he has won in 2005, 2006, 2007 and again recently in 2008.

For this celebratory show King Konris is teaming up with his first runner-up and Calypso Queen of St. Kitts, Queen Singing Jackie, second runner-up and third runner-up King Dis & Dat and King Astro respectively of Nevis.

King Konris said that he is thrilled and humbled to have achieved this particular feat in the calypso world and hopes that his achievement would serve as an inspiration for other young persons especially young boys in the Federation.

In fact in 1996 Konris won the Junior Calypso competition with his hit tune “Boys in Danger” in which he highlighted some of the challenges facing young boys, then of his age, who were obviously at risk of becoming delinquent.

Konris has decided, in keeping with his serious concern for this menacing problem with the youth, to donate part proceeds of the show on Saturday to the Rotary Advancement for Children Foundation and the Police Boys Club.

The celebration show which starts at 9:00pm on Saturday will also feature Queen Lady Angie, Best of the Rest champion; Queen Miss Independence, winner of the Junior Calypso competition, and the cream of the crop for carnival 2008 calypso season including Lord Kut, Lady Sunshine and Big Edwards.

Musical accompaniment for the show will be by the local up and coming Royalty Band augmented by a team of local horn players lead by trumpeter Nigel Williams. Reinforcement will also come from Trinidadian trumpet and trombone player of Roy Cape Band fame in addition to Tony Voisin former guitarist for legendary Charlie Roots Band out of Trinidad.