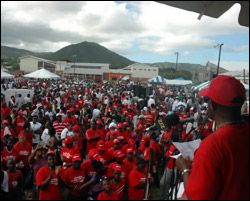 The minimum wage in the Federation of St. Kitts and Nevis is to be reviewed.

This was disclosed by St. Kitts and Nevis Prime Minister Hon. Dr. Denzil L. Douglas when he addressed thousands and workers and supporters at the end of the traditional Labour Day March through the streets of Basseterre on Monday afternoon.

“Comrades, two weeks ago Cabinet gave instructions to the Honourable (Dwyer Astaphan) Minister of Labour to begin the process of consultations with the relevant stakeholders with a view of increasing the minimum wage so that the domestic workers and the girls at the Industrial Estates can better cope with the rising cost of living,” said Prime Minister Douglas to the gathering when the march ended at the Patsy Allers Playing Field.

Dr. Douglas also disclosed that he has given instructions to the Attorney General and Minister of Justice and Legal Affairs, Hon. Dennis Merchant “to seek advice as to how we can provide the young ladies on the Industrial Estate with some form of gratuity payment when they would have ended their working life there after serving for 10, 15 and 20 years.”

“That time has now come for those who want to leave the industrial estates after working there for several years and cannot leave without a gratuity,” said Dr. Douglas to the tumultuous applause of the large gathering.

Dr. Douglas said that with the change of the national economy to one of services, his governing St. Kitts-Nevis Labour Government continues to put in place mechanisms to protect the ordinary workers.

He was referring to the series of public meetings held on St. Kitts last week and on the industrial estates by Mr. Lindsay Grant and his People’s Action Movement (PAM), who told workers not to march on Labour Day.