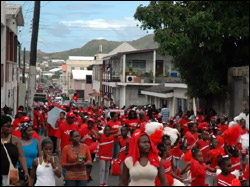 “Comrades no other government has done what this government has been doing for the ordinary workers of this country and you therefore cannot afford to gamble with a brighter future or prosperity. Your government will continue to improve the quality of life for all the citizens of this our fair land. We will continue to change St. Kitts and Nevis for the better,” Prime Minister Douglas told thousands at the end of the traditional Labour Day march.

He listed several decisions taken by his caring Labour Government aimed at reducing the high cost of living, which is not only affecting St. Kitts and Nevis and the Caribbean region, but all over the world.

“We are doing what we can to impact the cost of living. There are losers who are making all kinds of promises and giving misinformation and misleading people,” said Prime Minister Douglas.

He pointed to the decision taken in January 2008 when some 29 basic food and household items where placed under price control.  “This will limit the margins that the big businesses could change and recently we went further as a caring government and removed the consumption tax on ten (10) items which you the ordinary workers and ordinary people use on a daily basis,” said Dr. Douglas.

Government he said has and will continue to distribute hundreds of acres of land to former sugar workers and small farmers to encourage them to produce more food, the basic ground provisions, fruits and green vegetables. This he hopes will impact the high cost of living and reduce the high import bill;

Since January this year, the Labour Government has reduced the fuel surcharge on electricity bills by 50 percent and has also given permanency to the non-established workers who can now look toward their retirement in confidence.

” There is presently ongoing work with CARICAD to bring closure to that matter and I have given instructions that whatever exercise they are conducting, the results of this exercise must come to me no later than July of this year. We have given the civil servants a retroactive salary increase of 5 percent in December 2007 and I am looking forward to the completion of the CARTAC and CARICAD study in July to determine what the final payment increase will be like for our public servants,” disclosed Prime Minister Douglas.