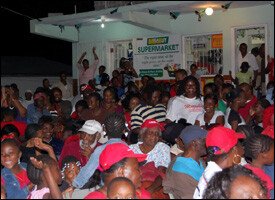 St. Kitts and Nevis Prime Minister Hon. Dr. Denzil L. Douglas paid glowing tribute on Friday to the residents of Newton Ground to Harris’ for electing him to serve in the National Assembly and hoped that his service and performance have won their approval.

Saturday March 21st marked 20 years to the day that Dr. Douglas and his Deputy Hon. Sam Condor were the only two Labour Party candidates wining their seats in the March 21st 1989 General Election.

“For the last 20 years I have done my best to be a committed and effective link between Newton Ground, St. Paul’s, Dieppe Bay, Parsons, Pogson, Lynches, Lavington, Saddlers and Harris’ and Government Headquarters in Basseterre.

“Three months short of 20 years ago, I was elected to lead the St. Kitts-Nevis Labour Party, and I immediately set myself to doing my very best to bring Labour back to a position of centrality, and relevance, and leadership of this country after 15 years and were successful in doing do in July 1995, but it was not without trials and tribulations because we did not get to where we are today,” said Prime Minister Douglas.

He hoped that his service as Parliamentary Representative and his Party’s nearly 14 years in government have met with their approval.

“Six years after you sent me to parliament. Six years after I was elected to head Labour Party, the people of Constituency #6 were standing with me, supporting me, and working with me, as I led Labour to victory once again, and showed the nation why Labour should be the ruling party in this land,” said Dr. Douglas, recalling the day after the 1995 General Election which saw his party winning seven of the eight seats on St. Kitts.

“I recalled the first morning when I left my father’s home. When the car arrived for me to take me to the Office of the Prime Minister for the first time, you greeted and lifted me as I came from my house and you placed me in the car. How can I ever forget you, my people,” said Dr. Douglas.

“I used to be a teacher before I went off to study medicine. When I came as back as doctor, I waited for months before I could be employed. One Permanent Secretary in the Simmonds/PAM Administration told me I better go back to teach. You know what I did, I came to St Paul’s. I went to the Baptist Building on the hill and Henny and I started my private medical practice with my father as my Secretary for my office. A few weeks after I opened my office here, I opened one in Basseterre and it was out of shame that they called me and gave me a job as the hospital,” said Prime Minister Douglas, who pointed out that in 1989 with two seats in the Parliament “we were taunted by the Kennedy Simmonds Administration which formed the Government of the day.”

“That is why I believe that when the change came in 1995 it was for a good”¦ there is no bitterness, I use those examples to show that we can persevere”¦ we can go through difficult periods as a Party and at the end we must emerge united and strong, because the Labour Party is bigger and stronger that any single one of us. There is no room for bitterness and rancor,” said Dr. Douglas.

“I have been your servant and you have given me the support to serve for the last 20 years. I am eternally grateful to you. All that have been achieved by your government has been achieved for you,” said the St. Kitts and Nevis Prime Minister, who told the crowd of his willingness to continue to serve.

“I am not tired. I am not weary. I can go on if you want me to go on,” said Dr. Douglas as he thanked each resident and members of the Constituency Branch Executive.