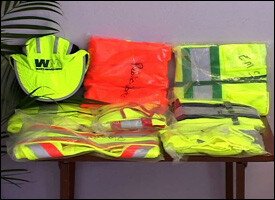 Seven Departments on Nevis now have more protective gear for use by staff who need to be prominent while on duty.

Junior Minister in the Nevis Island Administration (NIA) Hon. Carlisle Powell on Thursday March 19th at his Charlestown Office, handed the Department representatives a number of of high visibility vests, critical to their on the job safety, from OccuNomix International, a personal safety equipment designer and manufacturer based in the United States.

The gift was made to the NIA through the efforts of Minister Powell and his family Mrs. Kathleen Rawlins, who is employed by the company as its Credit Analyst/Credit Manager.

The Minister said he had approached Mrs. Rawlins on her last visit to Nevis to explore the possibility of securing some safety vests from OccuNomix at the lowest possible price.

He said he was moved to approach her on the matter owing to his attention of workers safety.

“I am happy to report that Kathleen was able to convince her company to donate close to US$3,000 worth of safety vests at no cost to the Treasury of Nevis. All that was required was that we pay for shipping the material to Nevis”.

The Minister singled out the Police and said he was pleased they received several vests since they had to be highly visible when they carried out their duties at nights.  He also said a number of “Police” stickers had been ordered and when the shipment arrived, would provide an additional five vests for the policemen.

Mr. Powell thanked OccuNomix in particular Mrs. Rawlins, for the gesture and cited it would make the lives of the workers much better.

He described OccuNomix as a leading designer and manufacturer of personal safety equipment for people all over the world. Their equipment included Vulcan hard hats, bump caps which were used to protect the heads of employees from falling objects; manufacturers of high visibility vests, support cloves, neo cool cooling bandanas, cooling headbands, disposable sweat bands and phase change cooling vests which helped to protect in hot weather.

Meantime, Engineer/Manager of the Nevis Water Department Mr. Floyd Robinson gave thanks to all who were responsible for the donation, on behalf of the Departments who received the vests.

He pointed to the increased traffic and driving speed on Nevis which had put employees who worked along the island’s roads at greater risk. He said the high visibility vests would go a long way to prevent accidents and injuries to the workers.