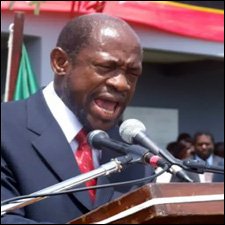 Grant continued, “When the PAM Government instituted electoral reforms, we did so months in advance of an election to give the people and the candidates time to adjust to the new rules.  Douglas is attempting to redraw the constituency boundaries on the eve of the election to benefit Labour’s candidates. Sam Condor’s rant spoke directly to Labour’s political motives.”

Grant concluded, “I called upon the Prime Minister to call the election and I continue to call for him to do it. What is he waiting for? He knows PAM is on the road to victory and that the only way he can win is if he stacks the deck in his favour.”

Later in the press conference, Douglas claimed that his policing strategy is “yielding results.”

“The only results Douglas has brought is a crime and murder crisis,” said PAM Parliamentarian  and PAM Deputy Leader the Hon. Shawn Richards. “Consider his so-called result: a murder rate that is spiraling out of control. In 2003, there were 10 murders in the Federation, and, that number is going up. In 2008, there were 23 murders in the Federation. The murder rate more than doubled in just five years under Labour In 2009, there have already been 19 murders. We’re on track to break last year’s murder number.”

Richards concluded, “The only result I can see that has come from Labour’s crime policies is a murder crisis that has people across the Federation living in fear.”