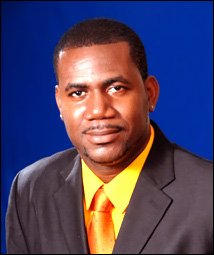 In response to a rash of intimidation last week, PAM Leader Lindsay Grant called on Prime Minister Denzil Douglas to join him in denouncing intimidation. Grant cited the burglary at his Old Road constituency office and spying of the PAM Legal Team while lunching at OTI as two examples of intimidation.

“Spying and burglary have no place in our democracy. PAM strongly denounces the use of intimidation to try and silence our right to speak,” said PAM Leader Lindsay Grant. “I call on Prime Minister Denzil Douglas to join me in denouncing the burglars and spies. I further call on Dr. Douglas to call for an investigation into these serious allegations. Burglars and spies must be caught, prosecuted, convicted and imprisoned.”

Grant continued, “I also remind the people of St. Kitts & Nevis that accessories to crime are just as guilty as perpetrators. If anyone knew about these acts of intimidation, including people in government and the Labour Party, they too must be brought to justice.”

PAM Parliamentarian Shawn Richards agreed, adding, “Intimidation must not be tolerated in a democratic society. PAM will continue to stand up for democracy and the rule of law and we will not be deterred. We’re on the road to victory because the people of the Federation are hungry for change. No amount of intimidation can change that fact.”