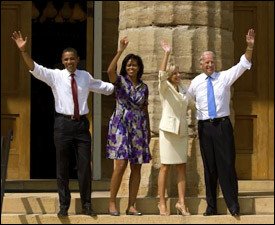 St. Kitts and Nevis Prime Minister Hon. Dr. Denzil L. Douglas said Wednesday that if Democratic Presidential candidate, the Hon. Barak Obama fails to win the November 4th United States Presidential elections, he will have to go back to a school of politics to understand the American people.

“If he fails (to win the United Presidency) I will be very, very surprised. In fact, I will probably have to go back to a school of politics to understand the American population in that regard. I believe very strongly that Obama will emerge as the President of the United States of America on November 4th” said Dr. Douglas.

He said there is fraternity between his 76-year-old St. Kitts – Nevis Labour Party and the Democratic Party in the United States.

Prime Minister Douglas sees both Obama and his Republican rival, Azrizona Senator, the Hon. John McCain as two “two extraordinary candidates seeking the presidency of the United States, and that my government looks forward to working with whichever candidate is elected by the American people.”

“My Party supports The Democratic Party. We do not interfere in the elections of course. We are  not intending to do that, but we strongly support the emergence of Barak Obama as the President of the United States,” said Prime Minister Douglas.

“It is something that the entire country should be proud of,” said Dr. Douglas, who announced that his St. Kitts-Nevis Labour Party has already organised an “Obama Labour Party Election Watch at Sugar’s on the Frigate Bay Road, “as we watch history being created as Obama presents himself to the world as the new President-Elect of the United States of America.”