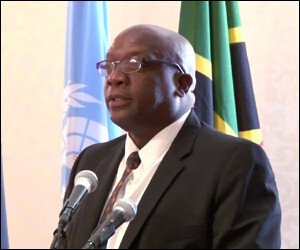 Prime Minister Dr. the Honourable Timothy Harris and Minister responsible for Energy, the Honourable Ian “Patches” Liburd are among regional leaders in the Bolivarian Republic of Venezuela attending the annual PetroCaribe organization summit and a memorial service in commemoration of the second anniversary of the death of President Hugo Chavez.

The IX PetroCaribe Summit, brings together seventeen delegations from member countries to boost the multilateral agenda and progress on integration, cooperation and socioeconomic development in the region.

The meeting will be headed by the President of Venezuela, Nicolas Maduro; Venezuelan Foreign Minister Delcy RodrÃƒiguez; Minister of Petroleum and Mining and president of the Council of Ministers of PetroCaribe, Asdrubal Chavez Jiminez; and executive secretary of PetroCaribe, Yllermina Celis Gomez.
Prime Minister, Harris commented on his trip to Venezuela.

“It is a pleasure to share in two important events happening in Venezuela,  one to memorialize the work and vision of former President Chavez, and secondly to participate in my first summit meeting of PetroCaribe.  He further stated, that meeting our energy consumption demands in St. Kitts and Nevis is made possible owing to the PetroCaribe arrangement.

PetroCaribe is an oil alliance of Caribbean states with Venezuela to purchase oil and petroleum products on conditions of preferential payment. The alliance was launched on 29th June 2005 in Puerto La Cruz, Venezuela.  In 2013, PetroCaribe agreed to link with the Bolivarian Alliance for the Americas (ALBA) to go beyond oil and promote economic cooperation.