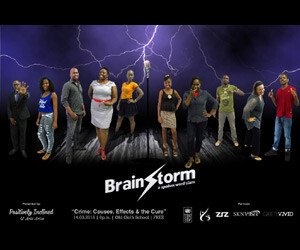 Residents in St. Kitts and Nevis will raise their voices against crime and highlight the causes, effects and possible solutions when they participate in the finals of “Brainstorm” – A Spoken Word Slam.

The finals will be held on Saturday (March 14) at the Old Girl’s School at 6:00 p.m. and feature performances by ten dynamic authors/poets. “Brainstorm” is part of a larger Community Challenge Project being implemented by Positively Inclined in collaboration with Arts Arise. It falls under the Social Innovation for Change Project funded by the United Nations Development Programme (UNDP).

Founder of Positively Inclined, Ervin Welsh, revealed that his project started back in January with an awareness campaign that included discussions at high schools in St. Kitts and in Nevis and with several media houses. On February 7th, a training session was conducted for registered participants which fine tuned the writers’ ability to meet the project requirements. On February 28th, a closed set performance saw participants present their thoughts on “Positivity and Politics.” The performances were filmed and the videos assessed by a panel of judges. Online votes were also used to select the finalists who will present on the theme “Crime: Causes, Effects and the Cure.”

Welsh explained that the topic was designed to stimulate discussion.

“A lot of times people who have really deep perspectives and a lot to contribute are often silent (verbally) but tend to put pen to paper,” he stated. “We are trying to reach those people to hear what they have to say.”

Based on the performances posted online and the feedback from viewers, Brainstorm has caused a flood of ideas.

“We’ve seen a door open to the further development of the art because we really see that there is a love for poetry,” Mr. Welsh emphasized.

That love climaxes on March 14th when the performers take center stage. There is no admission fee and Welsh encouraged interested persons, particularly young people of all ages, to attend what he predicts will be a “stimulating and entertaining experience.” He also thanked the Department of Youth for its continued support.

Plans to partner with local agencies involved in sports and other areas are in the works to continue the ongoing Community Challenge Project.