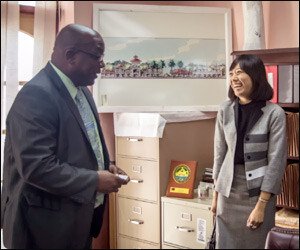 In a meeting with Beijing based development company, Gateway Real Estate, Prime Minister Dr the Hon Timothy Harris, has assured that his government is supportive of a 5 Star hotel slated for the Whitegate Development.

Prime Minister Harris told CEO, Yin Jin that his administration encourages foreign investments that promise to bring new opportunities for locals as well as those that diversify development around the country.

“I am happy that you are pursuing this development in the rural areas as this will serve not only to provide employment opportunities for people in that community but to assist in the development of new growth poles in St Kitts and Nevis“.

The Company’s CEO expressed her gratitude for the support of the government and highlighted that the hotel’s intended benefit for tourism expansion in the federation as well as employment.

General Manager of Gateway Real Estate, Walter Tang said that the hotel’s first phase of construction will be set on eight (8) acres of land and will ultimately feature 273 rooms, including villas, condominiums, spas and recreational areas.