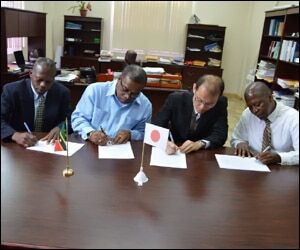 Officials from Japan International Cooperation Agency (JICA) have signed documents with the Ministry of Public Infrastructure, Posts, Urban Development and Transport, to begin technical cooperation with St. Kitts and Nevis in the area of renewable energy and energy efficiency.

At the signing ceremony on March 02, 2016, The Honourable Ian Patches Liburd, Minister of Public Infrastructure, Posts, Urban Development and Transport, said that Japan has committed to assist the region in addressing its energy concerns in light of the reality that St. Kitts and Nevis, like most other CARICOM countries, is highly dependent on imported fossil fuel as its primary energy resource. The minister highlighted that the high price of fossil fuels has impacted the country’s economic development through increasing the cost of living for its citizens. He said that JICA conducted a “Data Collection Survey on Renewable Energy and Energy Efficiency” for twelve countries of CARICOM including St. Kitts and Nevis from August, 2014, to February, 2015, in order to study the needs in energy sector in these countries. Based on the results of the survey, a technical cooperation project to promote energy efficiency between the CARICOM island countries and JICA is requested utilizing Japan’s experiences and technologies.

Senior Advisor for JICA, Mr. Tadayuki Ogawa, said that he was very pleased to begin cooperation with St. Kitts and Nevis.

“Today, I am very pleased to attend this meeting to sign the document, what we call minutes of meetings between Japan International Cooperation Agency and the Ministry of Public Infrastructure, Posts, Urban Development and Transport, as well as witnesses from SKELEC (St. Kitts Electricity Co. Ltd) and NEVLEC (Nevis Electricity Company Co. Ltd),” Mr. Ogawa said.

“We are aware, we recognize that your country is facing challenges of energy supply because you are very much dependent on the imported fossil fuel and fluctuating price of the crude oil market. We hope that we will be able to assist the country through this technical cooperation through introducing renewable energies and also promoting energy efficiency,” Mr. Ogawa added, while emphasizing that Japan has over 6,000 islands and is one of the world’s leading developers of renewable energies and indigenous technologies.

The Project between JICA and the Ministry of Public Infrastructure, Posts, Urban Development and Transport, will run for three years, from July 2016 to June, 2019. The joint cooperation will include the dispatch of six Japanese experts to St. Kitts and Nevis with Japan providing accommodation and transport and St. Kitts and Nevis providing office space. Japan will provide training for local staff in Japan in the areas of Micro Grid System including Grid Stabilization Technology and Policies and Technologies for Energy Efficiency Promotion.

The final document for the project will be signed in two months.