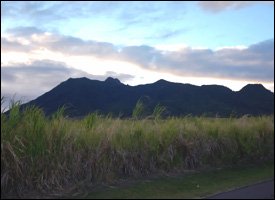 St. Kitts and Nevis Prime Minister Hon. Dr. Denzil L. Douglas declared Friday that his Labour Party Administration is ahead of the game and has already declared all forested lands in St. Kitts, above the 1000-foot contour, as protected areas.

“The protection of the Central Forest Reserve further demonstrates my Government’s commitment to the reduction in greenhouse gas emissions. This is a tangible step since the management of forests continues to be one of the most effective ways in which we can neutralize the overabundance of carbon that the world continues to emit,” said Prime Minister Douglas in a statement to mark World Environment Day, which is being held under the theme: ‘Your Planet Needs You – Unite to Combat Climate Change.’

Prime Minister Douglas declared his Government’s intention to join the international community in December in Copenhagen to call for and “Seal the Deal” on binding greenhouse gas emission reduction targets for developed countries.

“If it becomes necessary, we as developing countries will adopt binding greenhouse gas emission targets as well. We may not be the main culprits but we too have contributed to the problem. It has been said that no man is an island but climate change is a grim reminder that no island can escape the environmental misdeeds of mankind,” said Dr. Douglas.

He said the threat of Climate Change is daunting but inaction is not a sensible choice, therefore St. Kitts and Nevis solemnly pledges to do its utmost best to stabilize the atmosphere at an acceptable level of greenhouse gases.

“Remember the Department of Physical Planning and Environment needs you in this effort, this country needs you and your planet needs you to Unite to Combat Climate Change. Let’s fight this together,” appealed Dr. Douglas.

The St. Kitts and Nevis leader said his Government appreciates the contribution from the Cuban Government on the incandescent bulb project.

“I hope this kind gesture would have encouraged our citizens to continue to use these energy saving bulbs over the traditional ones,” said Dr. Douglas.

Noting that the authors of World Environment Day designed it to highlight environmental issues and to encourage and challenged all to take action, Prime Minister Douglas stressed that the theme again focuses on Climate Change.

Dr. Douglas said that as one of the smallest island nations in the region, St. Kitts and Nevis will be additionally challenged from the impacts caused by Climate Change.

“Coupled with the economic and financial obstacles we are currently facing, this is clearly the time that strong and life-changing environmental decisions have to be taken,” said Dr. Douglas.

He said that his Government acknowledges the difficulties faced in adopting a more energy-efficient economy.

“We however recognize that energy efficiency and the use of renewable sources of energy is the only course of action for us, as we are determined to lead by example,” said Dr. Douglas.

He added that although the steps taken may be viewed as small ones within the global environmental footprint “I envision that by 2020 we would have transformed our energy sector to 20% use of renewables and have adopted an aggressive stance on the incorporation and use of energy efficient technology.”

“My Government would like to introduce in the upcoming years incentives for citizens who transform their households to use less energy intensive technology. We have already made the first step in achieving this goal by rolling back the taxes on solar water heaters and we will continue to introduce further incentives as time goes by,” said Dr. Douglas.

In issuing a challenge on World Environment Day, Prime Minister Douglas declared that protection of the environment is basic common sense.

“If we continue to abuse our resources we will have none in the near future,” he said and encouraged all citizens to purchase or acquire a tree.

“This tree can be ornamental like our National Tree the Flamboyant or it could be a fruit tree or some other tree that will last.  Then take the tree, go out and plant it. This simple act collectively helps us to remove tons of carbon from the atmosphere, and will be one more step towards preserving our fragile but life sustaining country. But please fellow citizens, plant responsibly ““ get permission if you decide to plant in a public area,” said Prime Minister Douglas.

The Ministry of Sustainable Development through the Department of Physical Planning and Environment has declared June, as Environment Month.

The Ministry plans to highlight the work of the Department by demonstrating how the small changes make can have great impact and has mounted a an exhibition on environmentally friendly goods and services at Independence.

He echoed the words of the United Nations Secretary General Mr. Ban Ki-moon in his speech for World Environment Day 2009; in which he said: “˜The Earth faces the grave threat of climate change. While all countries will suffer, the poor will bear the brunt of the impact. We do, however, also have an opportunity to change course.”