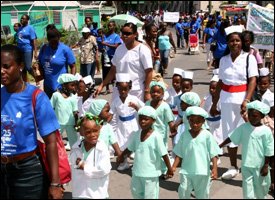 Hundreds of Preschoolers and primary school students, care givers, teachers and parents and counterparts from St. Kitts, joined in a parade through Charlestown on Friday, a key event on the activities which punctuate the month of June, dubbed Child Month.

The marchers were led by Minister of Education on Nevis Hon Joseph. Parry, Minister of Youth Hon. Hensley Daniel and other education officials. This year’s parade with the theme”25 Years of Educare, Parenting and Community Affairs” formed part of the25th celebration of the Early Childhood programme on Nevis.

Education Officer for Early Childhood on Nevis Ms. Florence Moving told the Department of Information she was pleased with the public support for the programme from parents and other sectors in the community and described its success as one with many accomplishments over the years.

“We thank God for bringing us thus far. We have accomplished many things over the years particularly in the area of parent involvement also we have upgraded our curriculum.

According to Ms. Moving, many fathers had become more involved due to increased awareness programmes that had been introduced.

She explained that a Better Parenting Programme would soon be introduced on Nevis as part of the activities designed for parents to help them to work closely with their children in communion with the school.

“At our PTA meeting we have encouraged the care givers and the teachers to engage fathers in most of their programmes that we do at the school level,” she said.

Ms. Moving explained the massive increase in registration over the last two to three years was due to the public awareness work that had been done.

“We went out to the homes and spoke to persons about getting registered so that they could be a part of the programme. The policy states that if you have three or more children taking care in the home, that you have a centre and you are supposed to register with the Department of Education, especially if you are receiving money for that service,” she said.

The Education Official said there was also an increase in the alertness of children, in the way they solved problems and much development in the children’s language which she attributed to a training programme for teachers.

“We do orientation for our teachers as they enter the Service and our Care Givers are given a two-week orientation. So I think that has helped a great deal in helping them to provide quality care,” she said.

Ms. Moving said there was cause to be proud of the quality of the Early Childhood Programme on Nevis since several persons from Antigua, Montserrat, Grenada, Dominica and the Bahamas had come to Nevis to learn from the programme. “From all the feedback from agencies like the United Nations Children’s Fund (UICEF) they think that we have a very good programme here.

Most of our counterparts refer to it as the best programme in the Caribbean so we are proud for,” she said.

Recently Ms. Moving was invited to Antigua and Barbados to look at the programmes there and to discuss how Nevis could help the other Caribbean islands to improve their Early Childhood Programme.