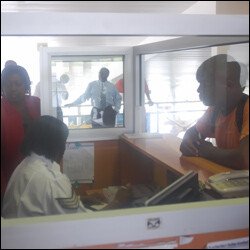 Dr. Douglas, who toured the Robert L. Bradshaw International Airport to view the system and observe its operation, noted that as St. Kitts and Nevis becomes a part of the international community in a technological way, his Labour Party Administration wants to ensure an improvement in border security and the ability of the immigration personnel and other national security officers, to access vital information on persons coming into the country.

“Information is now accessed from the data base of the Interpol network as a guide to identify persons who are entering the country and who ought not to, based on credible information provided by international agencies,” said Prime Minister Douglas.

Travelers can also apply for visas on line and get the necessary approval before arriving in the Federation.

Describing the investment as important, Prime Minister Douglas noted the signing of the visa waiver agreement between St. Kitts and Nevis and the Schengian nations of the European Union.

The system is at the Robert L. Bradshaw International Airport in St. Kitts, the Vance W. Armory Airport in Nevis, the Passport offices in Basseterre and Charlestown and the Minister of National Security.

Prime Minister Douglas was accompanied on the tour by Permanent Secretary in the Ministry of National Security, Mrs. Astona Browne; Head of the Immigration Department, Inspector Luther Kelly and officials of the St. Christopher Air and Sea Port Authority.