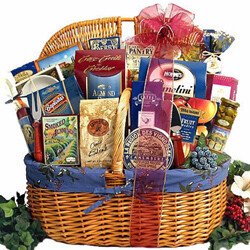 Just In Time For The Holidays….Food Packages!

Further relief for residents of St. Kitts and Nevis.

The Federal Cabinet has decided that as part of the relief measures announced last Monday by Prime Minister Hon. Dr. Denzil L. Douglas, no duty will be paid on food packages of up to 440 pounds with effect from December 12th.

And Kittitians and Nevisians returning to the twin-island Federation from neighbouring St. Maarten and St. Eustatius on Sunday will be among the first to benefit.

A senior Customs official said that as of December 12th the duty free allowance on gift parcels of imported personal foodstuff, has been raised from 30 kilos or 66 pounds to 200 kilos or 440 pounds until 31st December 2009.

He said that the allowance has also been extended on the personal food stuff within the contents of the baggage of residents and non-residents arriving in St. Kitts by air or sea.

Prime Minister Douglas in announcing a number of initiatives that his Labour Party Administration is of the view, will help citizens deal with the impact of the global economic crisis said public officers will be paid a double salary in December, the surcharge on electricity bills is abolished immediately and taxes and duties waived on the importation of paint.