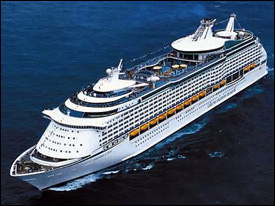 Royal Caribbean’s – Navigator of The Seas

St. Kitts’ Port Zante will be on the itinerary of the 3,114-passenger Navigator of the Seas when it is repositioned to the Caribbean from the Mediterranean in November.

The ship’ new winter schedule out of Fort Lauderdale, Florida, will include a range of five- to nine-night Eastern and Western Caribbean itineraries starting on Nov. 20.

Royal Caribbean International is a global cruise brand with 22 ships currently in service.

Navigator of the Seas is the fourth of  Royal Caribbean International’ five Voyager-class cruise ships. She was once one of the largest in the fleet and still ranks among the largest passenger ships in the world. Constructed at Aker Finnyards in Turku, Finland, the ship measures 138,279 gross tons, has 15 decks and can carry 3,114 passengers, plus crew of 1213.