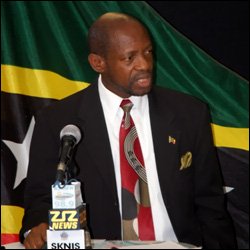 St. Kitts and Nevis Governor General His Excellency Dr. Sir Cuthbert Sebastian will deliver the traditional Speech from the Throne at the opening of a new session of the St. Kitts and Nevis National Assembly on March 10 following the recent general election.

This has been disclosed by St. Kitts and Nevis Prime Minister Hon. Dr. Denzil L. Douglas, who said the 2010 Budget Address will be presented two weeks later on March 23 2010.

“The special emphasis of this Government, during this term, on the heightened development of our people will be clear, with innovative policies both to develop the individual, and to energize communities.  This is because success in any area; agriculture, crime-fighting, entrepreneurship, the arts, community health – begins and ends with the individual and the community,” said Prime Minister Douglas.

He said that economic diversification will be a priority noting that the succcesful completion of the  Libyan Investment Bank of the Eastern Caribbean to be based in St. Kitts and Nevis.

“The benefits of this to both the Federation and the OECS are obvious. I should also, perhaps, add here that there are many ways to judge the degree of economic vitality triggered by a government.  One, for example, is owning one’s own vehicle since this dramatically expands one’s employment and entrepreneurial options, while significantly increasing the convenience and ease involved in matters pertaining to both health and safety, as well as recreation,” said Dr. Douglas, who pointed to the number of vehicle registrations in St. Kitts and Nevis, which moved from 9,200 in December 1995 to 21,500  in December 2008, an interesting indicator of the expanded options delivered by our policies.

He said St. Kitts and Nevis tourism will continue its policy to be a leader in tourism and said next month’s introduction of a second British Airways direct flight from London-Gatwick, a second weekly flight by Delta Airlines last December in addition to the daily American Airlines flight from Miami, the twice weekly American Airline flights from JFK, and the US Airways flights from Philadelphia and South Carolina augurs well for the industry.

Dr. Douglas also noted that despite the economic downturn, cruise arrivals in St. Kitts and Nevis are set to increase some 18 percent in the 2009/2010 season.

He said that the collaborative approach to crime fighting continues with the Premier of Nevis, Hon. Joseph Parry, pointing out that the national security teams of both islands met in Nevis on January 12th.

“In addition the collaborative approach with the international community also continues, with members of our Defence Force having recently met with their US national security counterparts in Barbados, in order to agree upon the strategic areas of emphasis and training which our forces will be pursuing, in the United States, over the next year.  We have already reduced non-gang crime, and will continue pushing this downward while  maintaining a sustained push against gang-related AND white collar crime, as well,” said Prime Minister Douglas.