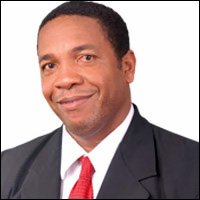 Getting a new home for the sport of basketball, ensuring student athletes are developed holistically, getting more of Government services online and strengthening youth empowerment programmes were among priorities laid out by the Honourable Glenn Phillip, on Tuesday.

The new Minister of Youth Empowerment, Sports, Information Technology, Telecommunications and Posts noted such, as this week’s guest on “The New Faces of Cabinet” miniseries which is running on the SKNIS radio programme Perspectives.

He explained that all of the major sports in St. Kitts have an internationally certified stadium and it is time that basketball had a new home.

“We spoke about that on the campaign trail ““ of basketball getting (its) own indoor facility and that is a priority of this Ministry at this time,” Minister Phillip stressed, adding that plans are also being reviewed to upgrade various facilities around the island.

“In terms of sports tourism “¦ that is one of the major thrusts why we are looking at an indoor facility also,” the Minister revealed, outlining plans to attract U.S.-based professional and collegiate teams.

Highlighting the linkages between youth and sport development, the senior Government official stated that while additional tools will be made available for athletes to advance on the field of play, measures to ensure success in the classroom and in society will be reinforced.

Meanwhile, Minister Phillip said that efforts will continue to place various Government services online. A major step in this initiative occurred recently when hospital records at the Joseph N. France were computerized to allow efficient reviewing of a patient’s medical history and billing records by relevant staff.

He forecasted future online upgrades. “If you are a 60-year-old living in the rural area and you need something like a wire transfer “¦ you can get it done right there in a post office in whatever district you live in,” he said, noting other aspects such as downloading passport forms and accessing birth certificates.

“”¦ We are trying to transfer all these different paperwork into a database so it is accessible to persons within the public.”

Minister Phillip praised the role the Youth Empowerment through Skills (YES) Project has had in equipping hundreds of young persons with social, technical and professional skills and assured that progammes such as these, which involve partnering between the public and private sector, will be strengthened to cater for increases in the demand for training.

The YES Project was designed to ultimately empower young people in starting their own business and one individual on the streets of Basseterre told SKNIS that Minister Phillip could cement a legacy in this area.

Other suggestions posed to the Minister included reviewing telecommunication rates and facilitating greater youth participation in governance as well as to work with local sporting associations to ensure athletes are covered by medical insurance should they be injured on the field.