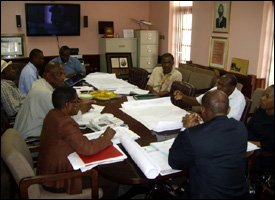 Prime Minister Hon. Dr. Denzil L. Douglas disclosed on Wednesday that some 350 acres of land has been leased or rented for agricultural development between 2005 and 2008.

With the growth in the tourism industry, the high cost of imported food and the availability of fertile land, the Cabinet under the chairmanship of Prime Minister Douglas approved the expansion of businesses by leasing 40 acres for agricultural land for crop and livestock farming to small local farmers in the Estridge, Mansion and Phillips areas. Thirty acres were also distributed to farmers in Old Road.

Dr. Douglas said that the Committee met last week Friday, and the week before to deal specifically with the distribution of land for housing purposes.

The CEO of the National Housing Corporation attended that meeting which met to identify land to allocate the required house lots for the construction of affordable homes under the 500-home programme.

“I will continue to meet with the Permanent Secretary in the Ministry of Sustainable Development and the Director of Lands and Surveys to continue to respond to the request for land to be allocated to the Special Land Distribution Imitative based on the applications received and also request for land for overall commercial and other major developments taking place in the country since those applications would come specifically to the Ministry of Sustainable Development,” said Prime Minister Douglas.