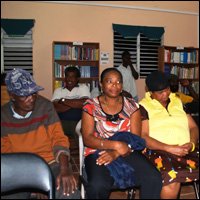 Residents of Brown Hill and the surrounding communities have been assured of a modern health care facility by the end of 2009.

This promise was made by Deputy Premier and area representative of St.John’s Parish, the Hon. Hensley Daniel during a Town Hall meeting on February 3rd at the Brown Hill Community Center, where he spoke of tremendous strides made by the Nevis Reformation Party (NRP) led government over the last two and a half years.

“The New Facility would not only house a health clinic, but it will have a pharmacy, an educational unit, a toddler and infants care facility,” said Minister Daniel.

During construction the present health care building will be temporarily relocated to Prospect, in the former Senior Citizens Home.  Residents were assured by Minister Daniel that transportation would be provided by the Ministry of Health, for those who would need.

Looking ahead, Minister Daniel asked the residents of Brown Hill for their continued support  to his administration during the relocation of the present facility and the construction of the new health center.