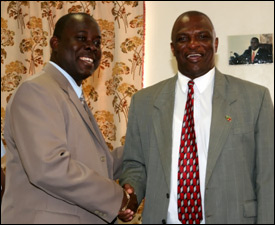 Minister with responsibility for Lands and Housing, Agriculture, Fisheries and Cooperatives Hon. Robelto Hector hosted his Federal colleague Minister Hon. Cedric Liburd on Nevis on July 11, 2008, to discuss matters related to a proposed fishing complex in Charlestown to be funded by the government of Japan.

In an interview with the Department of Information at the proposed site of the complex, Mr. Hector pointed to it’s benifit to Nevis and cited that the million dollar project had received the blessings of the Federal government.

“We [Nevis] have worked close particularly on this project. We know the benefits of the project to Nevis in terms of enhancing the fishing industry in terms of making sure that our resources are managed in that sustainable way.  Mr. Liburd I welcome you and I thank you so much for the opportunity to come and have a site visit of what is proposed, as your blessing is very important to see the project to its fruition.”

The Minister explained that the proposed complex would entail a main two storey building which would be outfitted with lockers and storage space for implements and fish and a cistern system which would provide an adequate water supply to support the complex.

Minister Liburd thanked Mr. Hector for the opportunity to visit the proposed site of the fishing complex and impressed upon the need to settle all matters related to lands that would be used for the project. He also pledged his support for the project and said he would do all within his power to see the project through.

“I am really pleased to be on this proposed site and I am hoping that soon the Ministry [of Agriculture] will work with those persons at least to have the land cleared. That is going to be very important because the Japanese government is always afraid of having to [get] involved in any project where there are disputes in any areas and therefore the lands have to be settled.

“As Minister, last year [2007] I had the opportunity, with Mr. Hector, to meet with the Japanese officials in St. Kitts, where I indicated immediately that we want to see the Nevis project moving. We got signal from them [Japanese officials] that we needed to request as quickly as possible. Immediately I had the opportunity to speak with the Prime Minister who in turn spoke to your Premier [Hon Joseph Parry] in terms of moving this project forward. I want to say that whatever I can do I will continue to do, as Minister with responsibility, in making sure that we are able to move this project forward here in Nevis,” he said.

Notwithstanding, Mr. Liburd said too that as the economy of St. Kitts and Nevis grew in particular the area of tourism that both the Federal government and the Nevis Island Administration wanted to see fishermen benefit from the industry.

He said that he had been receiving telephone calls from other Caribbean islands (St. Vincent, Trinidad and Tobago and Guyana) who had indicated their interest in supplying St. Kitts and Nevis with fish. However, he believed that a fisheries complex on Nevis along with the existing complexes in East Basseterre and Old Road would give the fishermen in the Federation the opportunity to benefit from the tourism industry.

Minister Liburd also noted the need for fishermen to spend more time at sea in an effort to return with a larger catch and better quality of fish and said it was a matter he had planned to discuss with Minister Hector.

“I plan to discuss the possibility of how we in St. Kitts and Nevis can use larger boats in order to have them on lease for our fishermen to use them to go out to sea for a much longer time, in order to bring quantity and at the same time quality fish to have fish for various hotels and restaurants in St. Kitts and for our own people,” he said.