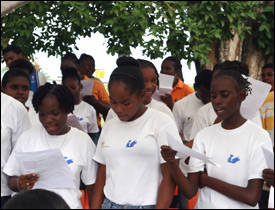 “Today we stand on the threshold of a new era in our development.  Many exciting things are about to happen.  Economically, the island is poised to take off.  We the citizens must be prepared for the opportunities and challenges which will present themselves.  What better preparation can there be than that of our youths being afforded the opportunity to be involved in the research, analysis and discussion of the theme for this year’s library programme” Permanent Secretary in the Ministry of Education and Library Services Mr. Joseph Wiltshire said.

This came at the closing ceremony of the first session of the 2008 Summer Environmental Awareness Programme on July 11, 2008 at the St. Georges Branch Library.

The session featured high school students from across the island which was held from July 07 to 11 at the St. George’s Branch Library at Croney’s House in Gingerland under the theme “Our Country our people our future”. The sub theme was “Reminiscing the past, relishing the present, charting the way forward”.

Mr. Wiltshire also spoke of the Library’s dedication to the initiative over the years and commended the staff for their efforts.

“I wish to commend the entire staff of our library services for their continued involvement in the development of our most important resource-our people.  Year after year the library continues to provide meaningful activities for the nation’s youth and this year is no exception.

“The theme chosen for this year’s programme is timely for on September 19th we will celebrate our 25th anniversary of political independence. I believe that all the participants have been provided with the opportunity to make a contribution and to be impacted by some aspect of the sub-theme,” Mr. Wiltshire said.

Chief Coordinator of the programme Mrs. Evette Liburd also spoke at the ceremony.  She addressed the role that must be played by all citizens of St. Kitts and Nevis.

“As we continue to shape the minds of young people let us remember that we have a great role to play in the future development of our country,” she said.

The participants engaged in lectures, fieldtrips, craft making, writing competitions and a cooking demonstration of the Federation’s national dish.

Jr. Minister of Communications, Works, Public Utilities and Post Hon. Carlisle Powell was one of the presenters for the week’s events as he lectured the students on the topic “Charting the Way Forward.”

With his piece “We are moving on,” Master De-Alje Liburd won the poetry contest while his brother Master De-Jano Liburd was the second place winner.

Also present at the ceremony were wife of Deputy Premier in the NIA and Director of the Nevis Library Services Mrs. Sonita Daniel, Librarian Mrs. Lornette Hanley, library staff and participants and Mrs. Dora Stevens wife of the late Mr. Ivor Stevens a former Deputy Premier and Minister of Communications, Public Utilities and Post and a member of the Federal House.