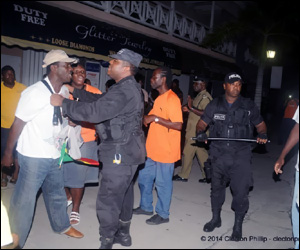 Protests continue in St. Kitts – Nevis over the 13 month delay in the debate of a Motion of No Confidence filed by Leader of the Opposition Hon. Mark Brantley since December 11th 2012.

Just one day after Carnival celebrations , protests resumed with scores converging on a popular local Indian owned jewelry store in the tourist zone called Port Zante. The owners of the store along with Prime Minister Dr. Denzil Douglas and his Deputy Hon, Earl “Asim” Martin along with other associates were visible through the store window seemingly in a meeting or discussion of some sort. The large crowd stood in front of the store calling for the Prime Minister to resign or debate the motion of no confidence.

As the crowd grew the Prime Minister was increasingly and visibly shaken and unnerved by the situation.

Police and Army personnel were summoned to quell the angered protestors and the Prime Minister was taken to an waiting caravan under heavy security which consisted of at least 8-10 of his personal bodyguards and another 10-15 members of the Police Delta Squad with another ten patrolling Army and Plain Clothes officers.

Demonstration continued on Saturday evening at the Prime Minister’s Gala event at the Marriott Hotel. The Gala’s keynote speaker was American talk show host, author, liberal political commentator, Tavis Smiley . Smiley was met with angry protestors with signs displaying “Democracy Under Siege’ and “Smiley whats happening in St.Kitts is no Laughing Matter” and “Smiley the people of this country have nothing to smile about” and more.

The demonstration was punctuated by the arrest of a protestor Clecton Phillip , a former Senior Government Official and now anti-government activist.

Phillip was peacefully picketing the Prime Minister Douglas, Smiley and the Gala Event with other protestors when they were told to move. Phillip asked what they were doing wrong when an officer was allegedly  ordered by the Commissioner to arrest him.

At press time he was being held at an outpost and was expected to be taken to the main Police Headquarters in the Capital Basseterre.

Protests have been ongoing for the last 13 months on the small idyllic nation. The demonstrations have seen thousands take to the streets in marches through the capital Basseterre as well as prayer vigils, public rallies, and a number of clashes with security forces. Most notably in July when Opposition Candidate Lawyer Lindsay Grant was arrested. The arrest drew widespread condemnation and drew hundreds to the islands main Police Headquarters demanding his immediate release. He was eventually released without any charges being laid against him.

According to Dr. Timothy Harris the leader of a UNITED Coalition of Opposition parties called Team UNITY it is very likely that protests will continue until either the Motion of No Confidence is debated or elections called.

Recent polls have suggested that should elections be called the opposition Team UNITY will win with possibly as much as 10 of the 11 seats in the twin island nation.