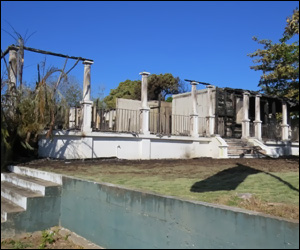 St. Kitts and Nevis‘ Prime Minister the Right Hon. Dr. Denzil L. Douglas warned Monday that while there is the right to protest, his Government will not tolerate “any operational shift from disagreement and protest to destruction and mayhem.”

He made the statement in  a national radio and television address following a series of opposition planned events in recent days and the destruction by fire on Sunday morning of the Embassy of the Bolivarian Republic of Venezuela and attempted burning of the Secretariat of the Organisation of American States (OAS) hours earlier.

In a 10-minute address, Prime Minister Douglas noted that on the evening of Saturday, January 4, 2014, an illegal night-time demonstration was held by PAM politicians and associates, Lindsay Grant, Eugene Hamilton, Timothy Harris, and others.

“Around midnight that same night, a fire was set at the Organization of American States Secretariat ““ and extinguished by our nation’s Fire Services.  A few hours later, the Embassy of Venezuela burned to the ground.  And two evenings prior, PAM politicians and associates,  Sean Richards, Jonel Powell, Timothy Harris and others rushed and mobbed a social gathering my Deputy Prime Minister and I were attending at a Port Zante business place  in an apparent attempt to intimidate either both of us and/or the business persons present,” he told the Nation.

He further pointed out that for months, persons wishing to replace his Government have asserted that “we, in St. Kitts and Nevis, are gripped by a “˜crisis.’ The public clearly disagrees.  And the public has behaved accordingly.  For this, opposition politicians have repeatedly berated Kittitians and Nevisians for not rising up like the people of Tunisia, Egypt and Libya.”

“It is clear, therefore, that some have decided that if there is no crisis, they will have to manufacture one.

“I warn any and all persons who see it as their bounden duty to create instability that whereas my Government fully respects the right of any and all Nationals to disagree strongly with any policy of my government; and while we respect the right of the public to protest and to demonstrate once the requisite permits have been granted; my Government absolutely will not tolerate any operational shift from disagreement and protest to destruction and mayhem.  And any person involved in fomenting mayhem and destruction in this Federation will be dealt with, to the full extent of the law,” said Prime Minister Douglas.

He told nationals that St. Kitts and Nevis is a part of a globalized reality.

“And my Government has, therefore, meticulously developed a solid array of valuable bilateral relationships with Nations around the world, all of which have redounded to the lasting benefit of Kittitians and Nevisians,” he said, pointing out that in recent months, those who oppose his Government have attempted to undermine it and weaken the Nation by attacking, in various ways, relations between St. Kitts and Nevis and other nations.

“My Government’s expression of sympathy to the Government of the Republic of China (Taiwan), in response to one of their fishermen being killed by the Government of the Philippines, was repeatedly and publicly opposed and ridiculed by Timothy Harris and other opposition candidates.  The esteemed leader and people of Cuba have been publicly ridiculed and Kittitian and Nevisian graduates from Cuban universities charged with attempting to bring so-called communism into the Federation.  And now, we have the attacks on both the Venezuelan Embassy and the OAS Secretariat.  The OAS Representative rightly sees the attempted arson at his Building as an attempt to destabilize our Federation, and we all know exactly who, in our country, has been trying, with zero success, to replicate in St. Kitts & Nevis,  what, in their words, has been happening in Egypt, Libya, and Tunisia,” said the Prime Minister.

“Both as Minister of Finance and as the Minister with responsibility for our security forces, I have placed every resource at the disposal of our Fire Services and Law Enforcement in their determination to establish responsibility for the afore-mentioned acts at the OAS Building and at the Embassy of Venezuela, and to bring them to justice,” Dr. Douglas announced.

He called on all nationals, regardless of political persuasion, to condemn these acts in the strongest possible terms.

“Together we have created a model nation here in St. Kitts and Nevis.  And we, as a nation, absolutely cannot – and will not – allow any person or persons to introduce into this country, at this precarious time, when it is so easy for nations to topple into social and political disarray, the types of extreme political tactics that had such tragic and tumultuous consequences in Jamaica in the 70’s and 80’s; in Haiti in the 90’s and the early years of the 21st century; and in certain other countries since then,” said Dr. Douglas.

He said that there are those in St. Kitts and Nevis whose primary objective is to win ““ as they define winning – regardless of the impact on our nation.  Like the Tea Party in the United States, and like some in our own country in 1967, they are energized more by what they are determined to destroy than by what they wish to build.

“This Government and the people of this country, on the other hand, have demonstrated, time and again, what, together, we can build. And this we shall continue to do. The fate of this tiny country is too important for us to do otherwise.         We shall remain vigilant ““ Government and the public alike. We shall continue to distance ourselves from those who are determined to place self above country. And, together, we shall ensure that this Federation continues to be the high-achieving, internationally regarded, opportunity-producing Nation that we are. My Government has an obligation to ensure the safety and stability of this country and our people. And this, without question, we shall most certainly do,” said Prime Minister Douglas.

He said St. Kitts and Nevis ended 2013 on a highly positive note.

“With much of the region and the world in crisis, the socio-economic needs of Kittitians and Nevisians were being met.  The international financial community had lauded all that we ““ the Government and the public working together – had achieved.  The country’s business community recorded strong sales in December; and throughout the Christmas and carnival seasons, nationals, residents and visitors alike had walked, danced, and mixed in our streets, all hours of the day and night, without tension or incident,” Dr. Douglas said.

He added: “The New Year dawned to find in our country a spirit of grateful optimism as we readied ourselves for the responsibilities in the year ahead.  More importantly, my Government is determined ““ and equipped – to ensure that in 2014 and beyond this spirit prevails.