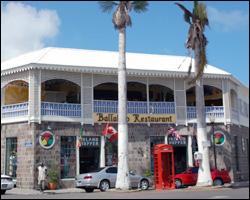 The St. Kitts and Nevis Cabinet has extended the stimulus package for standalone restaurants and Prime Minister and Minister of Finance, Hon. Dr. Denzil L. Douglas is predicting growth in the local economy in 2011.

The stimulus package which includes concessions on food and wine and on equipment and cutlery on a one-time basis, was implemented in April 2009 during the most difficult patches of the global economic recession when the services industry was at risk of severe decline.

“Since its implementation, the scheme of support for restaurateurs has been extended. The Cabinet of Ministers granted further extension of the stimulus package to ensure full recovery of the sector and to bolster the employment sector,” said Minister of Information, Senator, the Hon. Nigel Carty on Tuesday.

He said that Prime Minister and Minister of Finance, the Hon. Dr. Denzil L. Douglas reported to the Cabinet on Monday that a recovery of the global economy had been projected and that overall growth rates for 2010 and 2011 should be positive, reaching an approximate 4.5% level.

Dr. Douglas added that the local economy is also projected to return to modest levels of growth in 2011 and that the extension of the package is vital and will be reviewed in the next six (6) months.