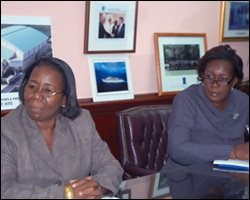 The CARICOM Observer Team that monitored general election in St. Kitts and Nevis said voters were able to cast their ballots without intimidation or harassment which augured well for the conduct of an orderly and peaceful election.

The CARICOM team said that voting and counting of the ballots took place in a transparent manner with “all stakeholders and observers – local, regional, and international – given approval to witness the count.”

“It was truly remarkable that the long delays experienced by some at polling locations where the electorate was dense did not deter the voters from exercising their franchise. They showed up at the polls, even as it rained in order to elect the government of their choice and despite some of their earlier concerns expressed to the Mission regarding the voters’ list, the re-confirmation of voters and voter education to name a few, voting was conducted in a peaceful and incident free manner,” said the CARICOM  Mission which “commended the citizens of St. Kitts and Nevis for displaying their commitment to the democratic process.”

It said that prior to Poll Day the Team met with officials and interest groups, attended political meetings and spoke with citizens in order to solicit their views about the elections.

“They all indicated their readiness for the elections. On the eve of the elections, the Mission had the privilege of witnessing the activities of the Electoral Office leading up to the distribution of supplies to Returning Officers. Added to this the seventy-one (71) polling stations on St. Kitts were visited by members of the Team for their suitability and general appropriateness,” said the statement.

It said the Team was out on Poll Day well before the polling stations were opened to witness the opening of the polls, the voting process, the closing of the polls and remained long hours after the close of Poll journeying to the central locations set up in each constituency to witness the count.

“The Mission is pleased to put on record that the count was conducted in a transparent manner in that all stakeholders and observers: local, regional, and international were given approval to witness the count,” said the CARICOM statement.
The statement said in assessing the conduct of the Poll, the CARICOM Electoral Observer Mission wishes to state that voters in St. Kitts and Nevis were able to cast their ballots without intimidation or harassment which augured well for the conduct of an orderly and peaceful election.

“However, there were concerns about certain aspects of the election process which will be addressed in the Report. On this note the Mission extends sincere appreciation to all for the cooperation and warm welcome which made it possible for them to discharge their duties efficiently,” it said.

The full report on the Mission’s findings and recommendations will be subsequently prepared and submitted to the CARICOM Secretary-General.

The ruling St. Kitts-Nevis labour Party (SKNLP) was returned to office for a fourth consecutive term under the leadership of Prime Minister Hon. Dr. Denzil Douglas.

The party won six of the eight seats contested on St. Kitts, with the main opposition People’s Action Movement (PAM) winning the other two.

On the island of Nevis, where three seats were contested, the Concerned Citizens Movement (CCM) won two with the other going to the Nevis reformation party (NRP)

Prime Minister Douglas was sworn in on Wednesday and his new Cabinet will take the oath of office on February 7, 2010.