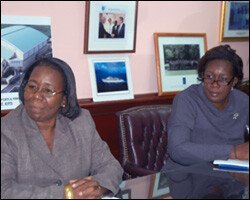 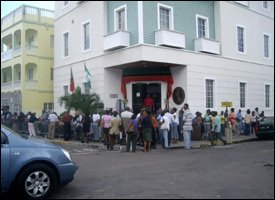 St. Kitts and Nevis Prime Minister Hon. Dr. Denzil L. Douglas has extended the deadline for persons whose names are on the current voters list to confirm their registration.

“The period from 27th December 2007 to 30th September 2008 that was designated as the Registration Period pursuant to the National Assembly Elections (Appointment of Registration Period) Order is hereby extended to the 4th October 2008,” a Statutory Rules and Orders signed on September 30th by Prime Minister Douglas stated.

Consequent on the signing of the Order, Supervisor of Elections and Chief Registration Officer, Mr. Leroy Benjamin issued a statement informing the public that confirmation of registered voters has been extended from Wednesday 1st October 2008 to Saturday 4th October 2008.

Over the past few days scores of persons have lined up outside the Electoral offices in St. Kitts and in Nevis in an effort to meet the September 30th 2008 deadline.

Basseterre, St. Kitts – Nevis April 30, 2008 (SKNIS) Over 1,100 persons have confirmed their registration via the mobile confirmation service that started two and a half weeks ago. The revelation was made on Tuesday by Supervisor of Elections Pastor …

The Supervisor of Elections, Mr. Leroy Benjamin has announced that the mobile confirmation process at various locations in Saint Kitts and Nevis will begin next week.

“The Electoral Office has arranged for persons who registered to vote prior to December 27, 2007 to confirm their registration at various locations within Constituencies throughout the federation. This mobile confirmation process will begin on Monday 14th April, 2008 and end on Saturday 7th June, 2008,” said Mr. Benjamin a statement issued from his office dated April 9th 2008.

The Supervisor of Elections said that the “special arrangement is for persons confirming their registration only.”