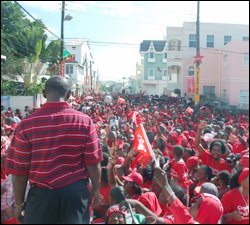 The allocation of portfolios will be announced during the Swearing-In Ceremony for the new ministers.

Mr. Edmeade said a Special Committee has been put in place to organise this historic event and is scheduled to meet on Friday afternoon.

Dr. Douglas, who was sworn in on Wednesday at Government House has been hard at work over the past few days structuring the new government of the St. Kitts-Nevis Labour Party.

He told the CUOPM that with the campaign now behind, there is need to settle down to continue the constructive work that has been being done for the people of the Federation.

Dr. Douglas said he was keen to get the country settled and refocused on the issues of nation building.