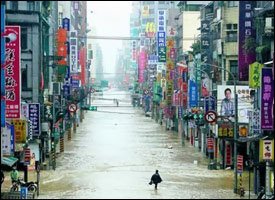 Flooding In Taiwan After Typhoon Marokot

The Federation’s Charge d’Affaires at the St. Kitts and Nevis Embassy in the Republic of China on Taiwan, Her Excellency Jasmine Huggins, has joined diplomats from friendly nations in raising funds to assist the victims of Typhoon Marokot there.

Ms. Huggins was among ambassadors from Taiwan’s diplomatic allies in Taipei, who pulled out all stops to sell items from their countries to raise funds for the victims of Typhoon Marokot.

The two-day charity sale, sponsored by the International Cooperation and Development Fund, drew hundreds of buyers in Taipei.

“People from my country felt compelled to help, adding that if possible, she would be happy to go to the disaster zone to help with cleanup efforts,” said Ms. Huggins.

Standing behind a table filled with handmade clay vases and leather goods from Nicaragua, Ambassador William Tapia said the sale was a display of gratitude and solidarity from the people of his country.

“The people of Nicaragua have received much help from Taiwan during times of need. Taiwan was often the first country to come to Nicaragua’s aid when we needed relief. Now that a disaster has struck Taiwan, we are here to help,” he said.

“Even though our hearts are big, our wallets are small. But we still want to do something to show our solidarity,” he said.

Bakary Singhateh, a Gambian student at National Taiwan Normal University, said he was deeply touched by the images of the typhoon he saw on TV.

To help with the relief work, he and other Gambian friends donated memorabilia they brought from home to the charity sale, he said.

“This is a demonstration that we are very willing to cooperate. No matter what amount, we are with Taiwan. We are expressing our solidarity with your country and your people,” El Salvadoran Ambassador Francisco Santana.