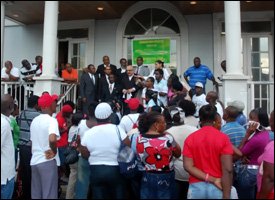 Lead Counsel for the Government of St. Kitts and Nevis in the Electoral Boundaries judicial review matter, Mr. Anthony Astaphan has submitted to a High Court Judge that the Electoral Commission, the Governor General and the Supervisor of Elections have no case to answer in the civil suits bought by two members of the opposition People’s Action Movement (PAM).

Senior Counsel Astaphan told His Lordship, Mr. Justice Errol Thomas on Friday afternoon that the claimants, Hon. Shawn K. Richards and Mr. Lindsay F.P. Grant, have led no evidence against the Governor General, the Supervisor of Elections and the Electoral Commission and as a result they ought to be removed from the civil suits as soon as possible.

Mr. Astaphan stated as facts that Mr. Richards and Mr. Grant refused to accept the appointment of Mr. Richards, to the various Parliamentary Committees and that the People’s Action Movement has no position, no view and had formulated no position on the revision of constituency boundaries except not to participate in the electoral reform process.

Citing previous local, Caribbean, Commonwealth and Privy Council rulings throughout his length submission, Mr. Astaphan  said the Claimants have failed to show that they been deprived of any right or privilege which they may have previously earlier enjoyed.

“In fact Shawn Richards said he did not know if he has suffered any harm and Mr. Grant’s only evidence of prejudice is that he will have to meet people for the first time, that they did not know him and that he would have to work harder,” submitted Astaphan.

“These are the trials and vagaries of any politician and his job is to get people to vote for him. It is an occupational hazard,” said Astaphan.

Mr. Astaphan pointed out that the CBC had before it a Report from a Technical Committee that Mr. Grant admitted was headed by Mr. James Buchanan whom he has trust and confidence in and other members who were public officers whom he had the highest regard for.

He submitted that the claimants have not established bad faith, bias or political influence. Mr. Astaphan recalled Mr. Grant’s evidence that as the Political Leader of PAM, he is afforded all the privileges and respect by several non-governmental organisations and contended that the Claimants have made no allegation against the members of the Constituency Boundaries Commission.

He submitted that there are three bases for the right to be heard which are conferred by statute, the Constitution or by practice. He said it is of paramount importance that in determining whether or not there was an obligation to be heard the nature of the commission must be considered and there is no Statute and practice in St. Kitts and Nevis that requires public hearings or consultation and submitted there is no free standing right to consultation.

He further submitted that the Claimants have not led any evidence of their willingness to cooperate, provide proposals, or participate in the process. “You cannot blow hot and cold,” said Senior Counsel Astaphan, adding, based on the evidence that PAM had taken a political decision to stay away from the process, they must not now be allowed to make a last minute jump on the forensic train.

Astaphan pointed out that PAM’s position that it will not participate in the Electoral Reform Process which began in August 2006, until the Voters List has been cleaned up, is published on the Party’s website, but that voters lists has nothing to do with boundaries.

Mr. Astaphan questioned whether one has a legal right to a particular boundary.

“Can someone insist that he or she wants a boundary this way or that way. Despite all the rhetoric of free and fair elections, the decision of the CBC has not affected the rights of the Claimants to vote. The right to vote has not changed, tampered with or watered down,” stated Astaphan. He said free and fair elections are considered in accordance with the law.

“We submit that the claimants cannot establish a right to be heard when the conduct of PAM is analyzed.” He submitted the court ought not to give a remedy, or comfort to a political strategy which has gone wrong and referred to a statement by the eminent Kittitian Chief Justice, Sir Dennis Byron that the Courts must not get embroiled in political matters and that “this case is a political case.”

“The conduct of the Claimants and their positions not to participate must be noted and the Court must not now give them relief,” emphasized Senior Counsel Astaphan.

Addressing the partial ouster Clause, (Section 50 (7)) Senior Counsel Astaphan contended that whoever drafted the St. Kitts and Nevis Constitution “was trying to be funny.”

“It is a partial ouster clause which only affects Rule One. It stands as it is and only applies if there is a violation of Rule 1, but not Rule 2,” said Astaphan pointing out that the Claimants have conceded that point.

“Seeing that Rule 1 is not an issue, Rule 1 cannot mean Rule 2. The Court must decide whether there is a violation of Rule 1 which is absolute,” he submitted at the end of the one-week trial in which several witnesses, including Chairman of the Parliamentary Constitutional & Electoral Reform and Boundaries Committee, Deputy Prime Minister Hon. Sam Condor; Chairman of the Constituency Boundaries Commission, attorney Anthony Johnson; Hon. Shawn Richards; Mr. Lindsay F. P Grant and Statistician, Ms. Beverly Harris.

Both sides have 10 days to submit written submissions to Justice Thomas who will have his judgement read in open court within the next few weeks.