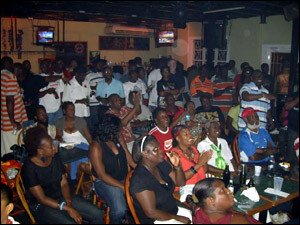 Nearly 500 nationals, scores of them youths, crammed Tuesday night’s “Obama Labour Party” at Sugar’s to see the election of the first African-American President of the United States of America.

The patrons cheered wildly when CNN’s projected that the Illinois Senator and Democratic Presidential candidate won the various states.

“What this young man has achieved is a clear indication that we too can achieve. From humble beginnings, (he) spent very little time with his father, but was close to his mother and grandparents. He learned what is meant to be discipline, to be focused, to work hard, respected himself and respected others,” said Prime Minister Douglas.

“We have seen history in the making,” said Prime Minister Douglas, who noted that when President-Elect Barak Obama started his race for the White House two years ago, the St. Kitts-Nevis Labour Party, which has strong fraternal affiliation with the philosophy of the Democratic Party of the United States “aligned itself with Barak Obama.”

“He believed in being his brother’s keeper. These are lessons that we have learnt from his great victory, the march to great victory by Obama,” said Prime Minister Douglas.

“I am happy to be a part of this historic occasion,” many said with tears in their eyes as Obama mounted the stage to deliver his address to over 200,000 people in Chicago.

The Obama Labour Party event was also in celebration of the long fought dreams of men like the Right Excellent Sir Robert L. Bradshaw and the Rev. Dr. Martin Luther King.