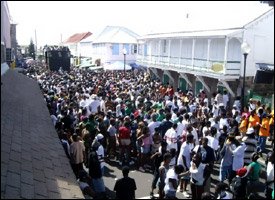 Thousands of residents, returning nationals and visitors took to the streets for the traditional J’Ouvert in Basseterre, the St. Kitts capital, as National Carnival celebrations moved into high gear.

From the early hours of this morning (Boxing Day), the bands hit the road and circled the major roads in Basseterre as thousands either lined the route or reveled to the Road March contenders of the bands.

The Road March contenders are “A Want Whale,” by reigning Road March Champions Grand Masters; “My House” by Nu- Vybes; “Hurricane” and “Jello” by Lights Out Band and “Back Shot” by Kollision Band.