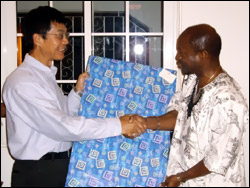 Former Taiwan Ambassador to the Federation of St. Kitts and Nevis, His Excellency Mr. John Liu and Mrs. Liu were formally bade farewell during a dinner in their honour hosted by Prime Minister Hon. Dr. Denzil L. Douglas.

In brief remarks at Formosa Gardens Restaurant, Prime Minister Douglas expressed the gratitude of his Government and People for the work done by Ambassador Liu in deepening the friendly relations between St. Kitts and Nevis and Taiwan.

“The government is very deeply sad that you are leaving, but of course life must go on. It provides a vehicle (in a way) for new horizons to be observed and I would say new challenges to overcome. So as you make your leave, you and your dear wife, I want to personally express to you how much we shall miss you and hope I will have the opportunity to meet with you again, this time I hope it would be in your beautiful country in the not too distant future,” said the Prime Minister.

Dr. Douglas said the words expressed were not enough and made a presentation as a token of the love and appreciation of the Government and People of St. Kitts and Nevis.

“It embodies to a large extent the friendship, the service and the brotherhood that we have established over the last few years. On behalf of myself and who are here as well as the entire Government and all the people of St. Kitts and Nevis, I present this to you and your dear wife and wish both of you have a safe journey,” said Prime Minister Douglas.

Ambassador Liu in accepting the gift said he was happy to serve as the Ambassador of the Republic of China on Taiwan to St. Kitts and Nevis and thanked all for their cooperation and friendship in helping to further strengthen the relationship between the two countries.