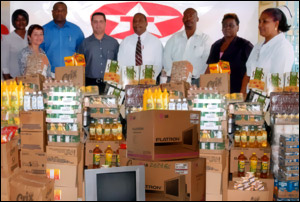 The Ministry of Health has received yet another donation for the Cardin Home from Chevron, better known as Texaco.

Supervisor of the Cardin Home Mr. George Richards hosted a brief handing over ceremony during which the District Manager of Chevron Mr. Hiram Acevedo made the presentation.  He said a similar donation was made in December 2006 and this new one consisted of food and household cleaning products, as well as two television sets ““ one would remain in the Cardin Home while the next one would go to the care facility in Saddlers.  All present were wished well and encouraged to make good use of the commodities.

The Chevron District Manager mentioned that his company has been partnering  and contributing to the Federation for over four years by donating to the elderly, schools, sporting activities and all persons who have been supporting their corporation in the Federation.  He said this was their means of showing their appreciation.

Permanent Secretary in the Ministry of Health Mr. Elvis Newton accepted on behalf of his ministry.  He said that the health care facility would be celebrating 81 years on May 06 and so presents had come early.  Mr. Newton said the Ministry of Health always appreciates local and regional contributions and so when Chevron offered, the donation was promptly accepted.

He further noted that the goods would ensure that Cardin Home residents continue to lead healthy lives since the foods were nutritious.  Additionally, it was noted that the television would give them access to entertainment and leisure, as such Chevron was providing both nourishment and entertainment.

In addition to the gratitude expressed by Mr. Newton, Director of Health Institutions Mrs. Gene Condor thanked Chevron on behalf of the Cardin Home.  She said that the food was timely considering that one of the activities of the 81st Anniversary celebrations was a Beach-nick.  She said that every year, residents look forward to the event at which they spend the day on the beach, have refreshment, music and enjoyment.