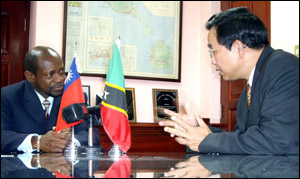 St. Kitts and Nevis’ Prime Minister Hon. Dr. Denzil L. Douglas has warmly welcomed the new Ambassador of the Republic of China on Taiwan to the twin-island Federation.

Warmly welcoming the new Taiwanese on his own behalf, as well as on behalf of his Government and the People of St. Kitts and Nevis, Prime Minister Douglas said he was pleased that the new Ambassador had arrived 12 hours after the departure of former Ambassador His Excellency and Mrs. John Liu “to continue the tremendous work of cooperation and development of better relations between our two countries.”

“St. Kitts and Nevis continues to be a very firm and strong dedicated friend of the Government and People of Taiwan,” said Prime Minister Douglas, who noted that he had the opportunity to speak with outgoing Taiwanese President, His Excellency Chen Shui-Bian a few weeks ago.

“May I ask you to convey to your President-Elect, my very personal profound best wishes and again congratulations for the tenure of office that he is about to begin,” said Dr. Douglas.

He told the new Taiwanese Ambassador that he was taking up his assignment in the Federation, at a time when St. Kitts and Nevis, “is in a transformation mode.”

“Your previous Ambassador started on a mission of assisting our Government and our People as we transformed the national economy from one which has been tied to sugar agriculture for centuries to one that is now based on services led in particular by tourism and hospitality services,” said Dr. Douglas.

The Federation of St. Kitts and Nevis during the years of the Denzil Douglas Labour Party Administration benefited tremendously from Taiwan’s assistance in the diversification of the agricultural sector, financing of the air and sea port projects, information and communications technology, sports and community and social development.

“We are grateful for the tremendous pioneering work that your Government has done so far in establishing this new culture in our people and in our Federation and I am certain that with your own continued service here, that position will be further strengthened and elaborated as St. Kitts and Nevis and the Republic of China on Taiwan continue to strengthen our relationship,” said Prime Minister Douglas.

Dr. Douglas also told the new Taiwanese Ambassador that during his tour of duty in St. Kitts and Nevis, he will find “our people warm and hospitable and the country warm and welcoming.”