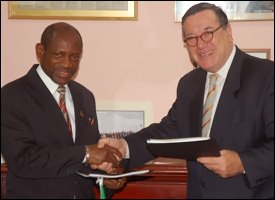 St. Kitts and Nevis has signed its first ever Double Taxation Agreement.

“The signing between St.Kitts and Nevis and Monaco is the first Double Taxation Treaty that we are signing with another country in ensuring that the financial services sector reaches the highest standard set by the international community,” said Prime Minister Douglas, adding that over the last several months, St. Kitts and Nevis has been actively engaged in ensuring that the Financial Services Sector is properly regulated, properly supervised and thus adhere to international standards.

“We have been in intense negotiations with several countries to ensure that the appropriate Tax Information Exchange Agreements between our jurisdiction and other jurisdictions. This is the first Double Taxation Treaty that has been signed,” said Prime Minister Douglas.

He thanked the hard working negotiating team which has its capable membership from both islands of St.Kitts and Nevis. He specifically thanked Ms. Shauna Lake who has been spearheading these negotiations and so far has been exceptionally successful.

“There is no doubt in my mind that the human resource of St. Kitts and Nevis Human in the public sector is determined to have our country placed as the highest jurisdiction in terms of the financial services that we offer,” said Dr. Douglas.

He is of the view that the strategy for the diversitification of the economy that is now been based on tourism and hospitality, the leading productive sector, is also well supported by the international financial services sector that we are building.”

“We are determined to move forward in a very positive way to impact the rest of the world,” said Prime Minister Douglas.

Monaco is a small sovereign city-state located in South Western Europe on the northern central coast of the Mediterranean Sea, having a land border on three sides only with France, and being about 16 km (9.9 mi) away from Italy. Its size is just about 500 acres with an estimated population of almost 33,000.

Monaco is the world’s most densely populated sovereign country, and the world’s smallest French-speaking country. An average person takes only 56 minutes to walk across the width of the country.

Monaco is a constitutional monarchy and principality, with Prince Albert II as head of state. It joined the United Nations in 1993.