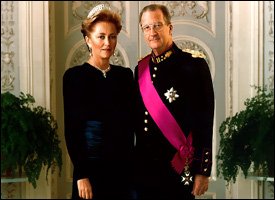 The King and Queen of Belgium

St. Kitts and Nevis‘ first female diplomat to head a sub-regional overseas mission has begun to present her credentials to European capitals of her accreditation.

Kittitian Ambassador, Her Excellency Ms. Shirley Skerritt-Andrew, who heads the OECS Mission in Brussels, Belgium, has presented her credentials to the King of Belgium, His Majesty King Albert II at the Royal Palace.

The OECS Mission in Brussels represents the interests of some OECS Member States to the European Union and along with Missions in Ottawa and Geneva forms part of the OECS programme of joint overseas representation.

Ambassador Skerrit-Andrew took up the position as Head of the Brussels Mission late last year.  This was shortly after the signing of the Economic Partnership Agreement (EPA) between Europe and CARIFORUM, whose membership includes the six independent OECS Member States.

Ambassador Skerrit-Andrew, an economist by training, said then that the Mission would make the EPA a major area of focus, providing support for the region’s adjustment from a non-reciprocal to a largely reciprocal trading relationship with Europe.

She also planned to place emphasis on helping to secure the timely disbursement of promised development assistance to OECS Member States from the European Development Fund (EDF).