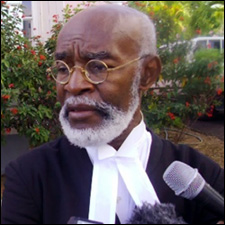 Prominent Kittitian-born jurist, Dr. Joseph S. Archibald QC  has been re-appointed for a second three-year term as a Member of the CARICOM Regional Judicial and Legal Services Commission.

The Commission appoints the Judges, and recommends the appointment of the Chief Justice, of the Caribbean Court of Justice. Members of the Commission, when travelling in the Caricom Region on Commission business, are granted privileges and immunities similar to those granted to Supreme Court Judges.