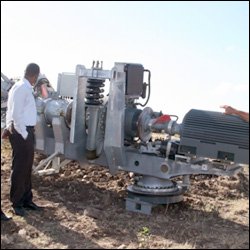 The island of Nevis, through the Nevis Island Administration [NIA] continues to showcase innovative ways of profitability despite the economic hardships that many countries face worldwide.

The NIA’s newest accomplishment is the start of the Wind Farm power supply under the directorship of Windwatt Nevis Limited.

In an interview with the Government Information Service, Junior Minister with responsibility for Communications, Works and Public Utilities, Natural Resources and the Environment, Honourable Carlisle Powell, announced that the Windwatt Wind Farm recorded its first billing period at the end of last month.

“From the 21st of July, we actually started paying for power generated into the grid by the Wind Farm,” Minister Powell said.

He added that 132, 396 kilowatts of power was delivered into the system during the July 21st to July 31st period and that his Ministry and the NIA by extension have been praised for their successes by nationals who returned to Nevis during this year’s Culturama festival.

“We actually haven’t received the first bill yet from Windwatt but that will be reflected overtime, in that, once we receive the bill then we have to do the calculations to see what amount of diesel power was displaced by the wind power. So, consumers would not actually see it [amount of wind power used] in their first bill but overtime they will be able to see it.

“Contrary to speculations, it is not that the people in the Maddens, Brick Kiln, St. James’ area will get the reduction only. The power is being produced into the national grid and so people all around Nevis are benefitting from wind energy and people all around Nevis will feel whatever small saving that is,” Minister Powell said.

Meantime, Minister Powell asked persons to be patient and remain hopeful that the much talked about geothermal project will soon be brought to fruition.

“The geothermal project is a project which is very close to the hearts of all of us in Nevis especially those of us in government because geothermal energy is cheaper energy than wind energy and so it is incumbent on us to deliver that project,” Minister Powell said.

He said however, that the geothermal project was a much more expensive undertaking but that plans were on schedule for the June 2011 delivery date.