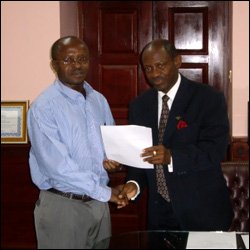 Small hotel operators in St. Kitts recently got a shot in the arm with the launching of the Special Incentive Package for Small Hotels.

“We hope the small hotel sector will honour the specific obligations that we have negotiated to ensure that their properties continue to be attractive and improved, to uphold high standards that we anticipate in the hotel sector and specifically the tourism product with the Government providing the necessary support to this sector,” said Prime Minister and Minister of Tourism, Hon. Dr. Denzil L. Douglas in brief remarks during the signing ceremony.

Prime Minister Douglas thanked his Minister of State for Tourism, Sen. the Hon. Richard Skerritt for pursuing the initiative as well as President of the Hotel and Tourism Association (HTA), Mr. Kishu Chandaramani and Chief Executive Officer, Mr. Michael Head, who were present.

Dr. Douglas singled out Mr. Chandaramani for lobbying for this initiative, even while serving as President of the St. Kitts and Nevis Chamber of Industry and Commerce and Mr. Head for the tremendous support provided during the discussion and formulation of the initiatives as well as the hotel representatives for their support and leadership in the development of tourism.

Small hotels are regarded as properties with not less than 10 rooms and not exceeding 99 rooms.