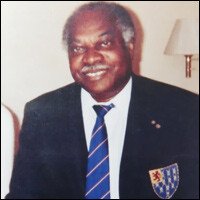 A prominent St. Kitts-born barrister, who lived and worked in the British Virgin Islands for many years, has died.

Mr. Lionel Barker, who was born at Kittstodarts, St. Kitts, on 13th January 1927, passed away Wednesday evening at the Queen Elizabeth Hospital in Barbados following a short illness, surrounded by family members.

Mr. Barker, 82, was a founding member of the British Virgin Islands Bar Association and served as its first President from 1976 to 1982.

The former distinguished member and friend of the BVI Association emigrated to the BVI in the early 60’s where he worked until he retired in 2004.

He will be cremated in Barbados and a memorial service will be held in the BVI on a date to be fixed.

Mr. Barker is survived by two children and other family members including sisters Mrs. Ruby Walwyn in Nevis and Ms. Maisie Barker in Barbados. He is also a cousin of Mr. Al Barker of Frigate Bay, St. Kitts.