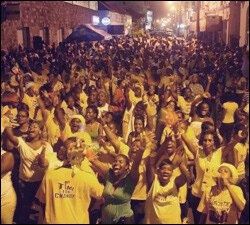 The St.Kitts-Nevis Opposition People’s Action Movement, PAM, are expected to launch their 2010 Campaign this evening with a massive Public Meeting in Constituency #4 at the Green Tree Housing Project. The Public Meeting will be the first of the year for the party .

“We will be holding our first meeting for this, the Year of CHANGE, tonight in my Constituency #4 in the Green Tree area,” said PAM Leader Lindsay Grant. “We are ready for this final stretch to the day which most in the country have dubbed FREEDOM DAY and that is of course the day of our general elections,” Grant Continued.

The People’s Action Movement have been holding Public Meetings twice weekly since they officially launched their CAMPAIGN FOR CHANGE in early 2009 with a massive and much talked about historic launch in Greenlands. PAM MP Shawn Richards indicated that starting with tonights meeting in Green Tree the party will increase the frequency and intensity of the public meetings with at least 3 Public Meetings per week until the  Prime Minister announce the election date after which Public Meetings, Rallys etc will be held on a daily basis.

“The Public Meeting in Green Tree this evening will start a series of meetings leading up to the Elections,” said PAM MP Shawn Richards. “After tonights meeting we will move to the Industrial site tomorrow at 12 noon then to the ferry terminal at 5pm and then to Bracktus Shop in Newtown at 8pm. On Saturday we will be in Upper Cayon for a Rally then on Sunday we will be in my constituency,” the PAM MP continued.

“Whether the Prime Minister musters the courage to ring the bell now or later the Party will be On the Road to Victory with our almost daily Public Meetings pounding the issues and highlighting the solutions and the measures of relief a new PAM Administration will provide upon taking office,” said Party Leader Lindsay Grant

It has been widely speculated that the Prime Minister will finally ring the bell to indicate the day of elections very shortly.

Recent Polls have suggested that the Opposition PAM are enjoying an advantage in favorability with the electorate. Polls conducted in mid and late 2009  have indicated that PAM will win 5 of the 8 seats in St.Kitts.