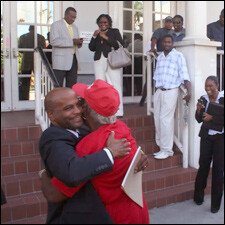 PAM Candidate for East Basseterre Glenroy Blanchette has declared that the Prime Minister’s forced dissolution of parliament in December coupled with the yet to to be concluded CBC court cases has sealed his fate in the upcoming general elections.

“Douglas and the Labour Party’s persistent efforts to change boundaries has been thwarted by the courts and now his fate is sealed and the demise of Douglas and the labour party will come on Elections day” , said Blanchette.

“He defied the courts, paid millions of taxpayers money to high-priced, high profile,overseas lawyers and spat in the face of the constitution all in a desperate effort to  Change Boundaries at the 11 1/2th hour to give his party a chance of winning the elections. That chance has gone through the window ,” Blanchette continued

In an interview with SKNVibes on 2nd December the Deputy Prime Minister confirmed that the unprecedented convening of Parliament every week, sometimes twice a week, for nearly two months was to attempt to gerrymander the boundaries. The Constituency #3 Representative also made another stunning revelation that  his government planned to try to change the boundaries even after Parliament was permanently dissolved by the Constitution using the emergency provisions. The plan according to Minister Condor was to advise the Governor General to convene an emergency sitting of Parliament so that the Report of the Constituency Boundaries Commission can be laid, debated and a proclamation passed.

This plan was,  however, severely undermined by the injunction imposed by His Lordship Justice Francis Belle that prevents any further meetings of the Boundaries Commission, prevents the Supervisor of Elections or the Electoral Commission from conducting any elections on any new boundaries and prevents the Prime Minister, Attorney General and Parliament itself from engaging in any deliberations on any new boundaries.

“With the stroke of the judicial pen further assault on the constitution was prevented because everyone can agree that gerrymandering boundaries is certainly no national emergency,” said Blanchette

The presence of the  injunction prevented the outgoing Denzil Douglas administration from gerrymandering the boundaries according to the plan revealed by Condor. The attempted gerrymandering  would have likely precipitated yet another round of constitutional litigation . The dissolution of Parliament means that new laws cannot be passed unless under a real emergency situation. The constitution also states that the boundaries are set once the Parliament is dissolved. This information is well known to the government . However the Prime Minister still vigorously pursued the last minute boundary changes.

The Prime Minister’s failed attempt to change boundaries after such a vigorous pursuit have prompted political pundits to declare that the Labour administrations reign will likely end come the next general elections.