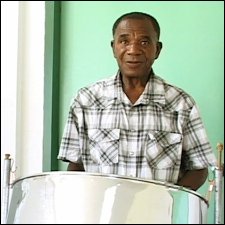 The Department of Culture and the National Carnival Committee has revealed musician and cultural enthusiast Spencer Duggins as the Grand Marshall for the 2009/2010 Carnival Season.

Duggins grew up in Temple Alley, Basseterre and received his early education at the Basseterre Boys’ School.  At the tender age of 10, he began learning to play the steel pan. Two years later, he beamed with pride as he placed a pan around his neck and joined members of the Silver Sword Steel Band for his first street performance.

He stayed with the band for 14 years until he moved on to play with the Brooklyn Dodgers Steel Band, which took its name from a famous American baseball team. After a five year stint there, Mr. Duggins lent the sweet melody of the pan to a string band which evolved into today’s popular Jingle Bell String Band. Duggins, now 73, still plays with this band.

An official with the Department of Culture told SKNIS that Mr. Duggins has represented the Federation as a cultural ambassador in countries around the world including Anguilla, Antigua, Tortola and the United Kingdom.

He has been recognized for his numerous achievements in culture and received an Independence Community Award several years ago. As Grand Marshall, Mr. Duggins will lead the Grand New Year’s Day Parade on January 01, 2010.