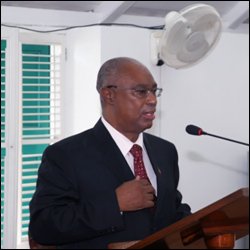 Premier of Nevis and Minister of Finance Hon. Joseph Parry, presented a 2010 budget of M$164 with no new taxes themed “Re-orienting economic activity by fostering a competitive business and investment environment”. The budget address was delivered at a sitting of the Nevis Island Assembly on Wednesday.

The Budget represented a 6.36 percentage increase over the M$153budget of 2009 which has been attributed to the impact of the global recession.

Mr. Parry spoke of the programmes that would continue during 2010 and important ones related to security that would commence. He pointed to the water drilling programme which he said, would continue to ensure adequate capacity for a growing economy.  The year will also see the continuation of the Road Improvement and Maintenance of Schools projects.

“My Administration is highly committed to providing adequate security for both nationals and residents. To demonstrate such commitment, we propose to undertake several projects to improve the condition of law enforcement officers.

“Combined costs of these projects are $2,315,070 with estimated spending for 2010 being $1,948,623. Sequenced according to financial significance, those programmes include the purchase of land and construction of a new Cotton Ground Police Station, construction of Police barracks at Belle Vue and the repair of the old Cotton Ground Police Station,” he said.

Mr. Parry said some of the obstacles which Nevis faced in 2009 due to the global recession would undoubtedly continue to affect the island in 2010 and the projected outlook for overall activity was less than upbeat.

The total revenue on taxes was calculated at $72,341,000 where subsidiary reduction was expected for taxes on income.

The Finance Minister explained that taxes on domestic goods and services collected at the Inland Revenue Department would continue to suffer from low receipts for Hotel and Restaurant Tax and Stamp Duties. Customs collection for taxes on International and Trade Transaction would see a drop of 11.94 percent compared to the 2009 projections.

He said declines in Import Duties and Consumption Tax were the major attributors to the reductions and the Financial Services Department revenue was also expected to shrink due to a decline in non tax revenue.

However, he said the estimated current expenditure which included principal repayment and transfers for 2010 stood at $125,830,000.